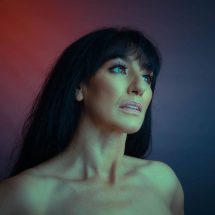 Scottish Diva Mary Kiani has been a professional and successful musician/singer for more than 2 decades.

Her music and voice have taken her all over the world to record and she has been lucky to perform and also to work with other great successful musicians including; Eddie Reader, Donny Osmond USA Tour, Paul Young, Manfred Man, Texas and the list goes on…

Her big break came when she joined Scottish rave band ‘The Time Frequency’ and over the years Mary notched up 8 national Top 40’s. Real Love reached No 1 in the Scottish charts twice and a highlight of her career was performing the single live on BBC’s Top of the Pops, sharing the stage with the likes of Debbie Harry & Aeorosmith!

After leaving The Time Frequency, Kiani signed a major solo recording contract with Mercury Records and took the star studded route to a successful solo career. With her energetic dance hits she quickly became one of the top nightclub acts on the scene. Mary’s solo debut solo single When I Call Your Name went top 20 in the national charts and straight in at No 1 in the national dance charts. Visit her Video page to view the ‘Top of the Pops’ performance.

Crowned Mary Queen of Scots in 1995 by the readers of top UK dance Magazine M8. Mary was recognised by the International Dance Awards with a nomination for Best Female Vocalist preceding another massive club hit with 100 % and another Top 20 Chart placing.

The success of Mary’s double ‘A’ side single I IMAGINE was great enough to turn Mary into a Sydney scene celebrity and she has been a mainstay of gay dance parties and gay nightclubs ever since.

Mary is still a popular performer on the dance club circuit; her singles always included remixes that proved popular on the scene. Mary’s live performance highlights are many but include recently the renowned Colourfest Dance Festival held in Braehead arena Scotland and her massive 2006 Sydney Mardi Gras Show with the I Imagine show as “Memoirs of a Geisha”

Mary’s last album The Sydney Sessions was recorded in Australia with producer Steve Peach and released through JRB Music. Described as “a club record with warmth and variety that combines new tracks with freshly remixed classics.”

Recent work in Sydney has included the successful sold out “live and intimate” shows at Slide in Sydney. With both jazz and dance sets Mary has entertained the audiences with stories from her past and songs from past and present.

Mary has also recently collaborated with UK dance production team Bimbo Jones who are famed for their remix work with Pink, Lady Gaga, Britney Spears among others. Her live performance of this track includes a full percussion performance.

Going back to her jazz roots recently Mary has been performing jazz and cabaret at the prestigious Fort Denison every Sunday through the summer season. The cocktail and jazz sets add a sparkle to corporate events and recently companies such as Macquarie bank and Hewlett Packard have booked Mary’s talent to entertain their event.

Mary is a true talent, with a big voice and bucket loads of charisma. She has a loyal fan base around the world, through her many releases and tours.