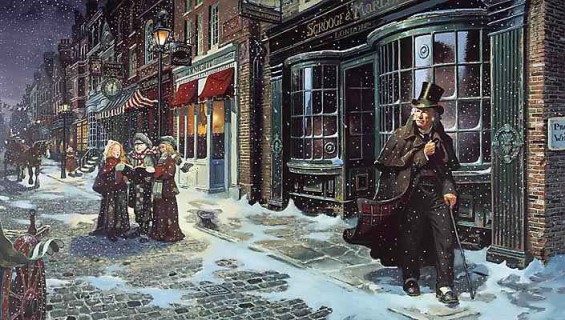 It’s Christmastime in Australia. There’s no snow on rosy cheeks or eggnog drinking by a roaring fire and we don’t all believe in the babe in the manger in the royal city of David but we sing about all of it with conviction. I had been thinking about Christmas carols for a while and it was initially “The Twelve Days of Christmas” that attracted me, why it is that I find it so delightfully peculiar, like a Yuletide version of Alice in Wonderland that you sing. But instead my thoughts came to rest on the wonderful Christmas carol that you don’t sing, A Christmas Carol, by Charles Dickens.

Why did Dickens call his Christmas novella about the redemption of Ebenezer Scrooge A Christmas Carol? Carols play a very minor role in the story; Scrooge chases away a young boy who tries to regale him with “God Rest Ye Merry Gentlemen” and later, when visited by the first of the Spirits, he admits to regretting it. The word ‘carol’ appears once in the title and is used twice more in the entire work. This is not a story about a Christmas carol, it’s the story that is the Christmas carol. It is true that we might classify a Christmas carol as a popular hymn or song with a Christmas or seasonal theme that is traditionally sung before Christmas and by naming his story a carol, Dickens asks us to ponder the very question of what things are, and to question the veracity and limitations of accepted definitions. Dickens saw the potential of all manner of things. He quite evidently thought about this thing called a carol: he labeled the chapters of A Christmas Carol “staves”, a stave being an archaic word for a stanza or verse and with his pen, remade his novella into a work of verse … just like a carol. His two subsequent Christmas tales were similarly fashioned; The Chimes was divided into “quarters”, and The Cricket on the Heath, into “chirps”. While these re-designations may be seen as lighted-hearted, tongue-in-cheek literary devices, I see them as Dickens demonstrating how an individual can break with tradition in order to improve the system. Most things belong to and support a system, which is only an agreed way of managing and not a ‘natural’ order of any kind. Dickens understood this through and through; he observed the world around him and saw how it was constructed and held together by beliefs that underpinned a class system, which visited misery and humiliation on the poor. Dickens had great sympathy for the working poor and the unemployed, social progress through industrialization extracting a disproportionate toll from their class and being born among them not something deserved but random chance. Those who were more fortunate and with the means to improve the situation of the less fortunate are morally obliged to do so; they should act independently and be guided by their individual consciences.

To break with tradition in order to improve the system, Dickens imagined a new tradition and it is largely his vision of a secular Christmas that we celebrate today and at the heart of it, the gathering of family and friends, Christmas food and drink, charitable giving and carols. The role of carols is incredibly significant. In the early 1840s when Dickens wrote A Christmas Carol, carols and exuberant expressions of joy in song were just beginning to make a comeback after the long hangover of Puritan Protestantism. Dickens must have realized just how much the spirit of Christmas was invested in the repertoire of Christmas songs. And it’s still true today. Nothing signals the approach of Christmas like hearing carols for the first time. People who don’t sing will sing Christmas carols or face being called a Scrooge. In a poll of friends asked if it would feel like Christmas without carols, it was a resounding “NO”. Not even in his wildest dreams could Dickens have imagined the huge impact that his Christmas story would have. His book has never been out of print and is the second most printed book in the UK, second only to the bible. Pretty impressive for a carol you don’t sing! Bah humbug to dreaming small! Merry Christmas and Happy New Year!