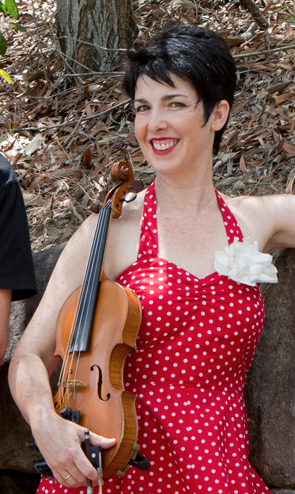 Born and raised in Brisbane, Catherine (aka Cath) Mundy is a singer, songwriter, arranger and performer who has been creating and conducting  community choirs since 2008 and currently conducts three choirs – Freedom   Train, Mixed Beans and now With One Voice Brisbane.

Since the age of seven, Cath’s life has been driven by her passion for the  Performing Arts. As a child and teen, she studied violin, piano, cello, music   theory/composition, singing, dance and theatre and performed in numerous shows and events around Brisbane. At age 13, she started her own productions company to produce musical shows in the school holidays; at age 17 she was performing professionally.

In 1993, Cath completed her BA degree in Drama and Music at QUT Brisbane, where she sang Soprano in the Women’s Choir and composed/musically-directed her own scores for numerous theatre shows as diverse as Shakespeare, Goldoni, Brecht and contemporary Australian theatre. Her first big gig post-uni was touring Far North and Central Queensland primary schools as an actor-singer-musician for the Queensland Arts Council.

In 1995, Cath began a partnership with British singer-songwriter Jay Turner (also her husband) that continues to flourish two decades on. In their acoustic-folk duo Mundy-Turner (mundyturner.com), Cath plays piano, violin, ukulele, co-writes/arranges their large repertoire and of course, sings both lead and harmony. They have released six full-length albums, won a Queensland Recording Association Award for Best Folk Album, had tracks nationally play-listed by ABC Radio, toured their live show to many countries and played support to major acts such as Irish hit band The Corrs and English folk-rock founders Fairport Convention.

The duo has recently expanded into the Mundy-Turner Band, with drums and bass, now performing gigs around the South-East Queensland.

With Jay, Cath has also produced and co-written original musical Billy Buckett – A Rock ‘n’ Roll Love Story (billybuckett.com) which won several awards at the 2013 Gold Coast Theatre Awards, including Best Musical Directors for Cath & Jay, and the Gold Palm Award for Most Nominated Production. The musical will soon be published for international licensing by Stagescripts UK.

Cath founded Freedom Train community choir with Jay in 2008 and the following year began directing Mixed Beans multicultural choir at Beenleigh Library. In 2013, Mixed Beans released Collage, an album of unique songs from around the world, to raise funds to keep the choir running as a free-to-the-public service.

Cath describes conducting community choirs as “the most joyful job in the world!” She enjoys creating her own arrangements for her choirs and, above all, loves enabling and empowering people to reclaim their “human right to sing”.