In the 1999 satire Fight Club, men would gather around to fight bare-knuckle to find some form of cathartic primal release. This is hardly in line with Work Safe regulations, so Creativity Australia went a different way, choosing the slightly more socially acceptable activity of group singing. The irony is that group singing, specifically “choir” singing, is about as embraced by males as fighting is – which is not very.

There are a few reasons that contribute to the stigma of choirs that reflect the themes at play in Fight Club, namely it challenges the stereotype of what it means to be a man.  Sport, beer, and girls aren’t readily accessible in a choir. Compounding the issue is the word “choir”, which for some has religious or school connotations. Yet this is not the case for the With One Voice choirs, where each choir takes on its own identity, gathering young and old, singing anything from karaoke classics to pop hits and gospel.

Then of course there is the fear; the fear of not being able to sing, of being judged, and of being made to look foolish in a room full of strangers. But like Fight Club, in a roundabout way, With One Voice choirs offer communities of support, a means of exercise and release, and the chance to do something very different. It takes courage to stand toe-to-toe with another man and trade punches, but how many would feel more comfortable doing that instead of standing toe-to-toe with a group of people singing?

Tania de Jong AM is to With One Voice what Tyler Durden is to Fight Club. Where Durden saw a path of self-destruction as a means of social inclusion and restoration, Founder and Chair de Jong saw a stream of hope in inclusion and singing as way to end social isolation. The choirs aim to bring people together who may be suffering some form of hardship, be it a disability, isolation or depression, or those who’ve recently relocated to Australia. Not everyone who attends are facing hardships, many participants are people looking to try new form of therapeutic release, who want a chance to sing, or just simply want to be part of and give back to the wider community.

The choirs are backed with the science that group singing releases endorphins, a hormone associated with pleasure. During a recent study into the With One Voice choirs, Swinburne University found 98% of participants experience less stress, and 66% feel less depressed (take into account that not everyone who goes to the choir are depressed). 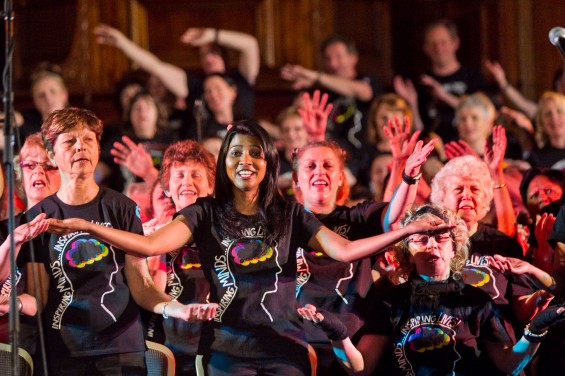 The With One Voice choirs meet weekly in various in three states of Australia, with pilot programs starting internationally. For Victorians, you can find them on a Tuesday from 5:30pm at the Sofitel Melbourne on Collins. Or in St Kilda and Geelong on Mondays, and Footscray on Thursdays, they’re even found in Sydney and Brisbane on Tuesdays and Wednesdays respectively.

On August 1, Creativity Australia will relaunch a campaign to celebrate the benefits of community singing and raise money to support participation for choir members in need. The campaign is called Sing for Good (formerly Sing for Spring), and aims to be as big as Movember. All it requires is uploading a video of a group of you and whoever you like singing, with a donation encouraged.

Like Tyler Durden’s Fight Club, which started sprouting up everywhere, Creativity Australia aim to eventually have entrants from every postcode in Australia.