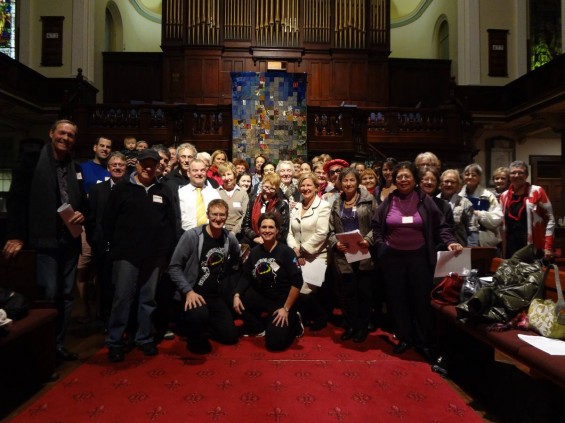 Following the Sydney Sings Soirèe, held at the Pitt St Uniting Church on Tuesday 28th August, we were featured in the Sydney Morning Herald.  Thanks to Malcolm Brown for coming along and reporting on the event!

‘CHARLES LEON, 52, one of the stolen generation, who grew up in children’s homes and with a foster family, might not have a lot to smile about but with the new community choir Sydney Sings, which had its inaugural public performance this week, there were plenty of smiles.

Mr Leon was born in Bellingen in 1960. He comes from the Biripi people on his mother’s side and the Warrami people on his father’s. He has come with his didgeridoo to accompany the choir when it joins in a worldwide song, Good Earth Singers, in December.

That is when community choirs all around the globe will use their mobile phones and apps to sing the one song, in succession at allocated times, and choristers using those devices will listen to their fellow singers in Nigeria, Russia, France …’  [Read]

Don’t forget to click for more photos and videos!