Sydney Sings to Save The Earth – Join Them! · Creativity Australia

Sydney Sings to Save The Earth – Join Them! 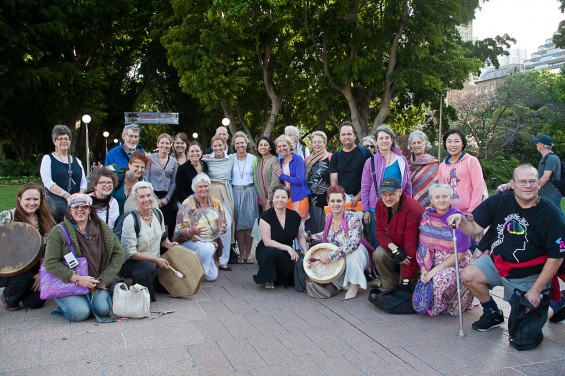 Photo: Sydney Sings, Shyla Nelson and Rev. Stephanie Dowrick’s congregation are coming together to sing! Thanks to Brad Harris for the photo.

We all know about the healing power of singing…it’s the easiest way to transform a bad day into a good one and the quickest way to bring a smile to someone’s face! But, how often do we think of singing as a way to heal the earth? Is it possible for a song to heal the ground on which we stand?

Well…how will we know until we try?

Led by internationally acclaimed singer and earth lover Shyla Nelson, the One Earth One Voice is a global campaign that intends to do just that. By bringing together 15 million voices to sing ‘Ise Oluwa’ in synchrony on December 21, 2012, we are sending a message of hope, healing and love to the earth. Millions of souls around the world will join hands and hearts to open into a new world consciousness of Oneness, celebrating the end of the Mayan Calendar December 21st. Much has been written, discussed and conjectured about 2012 and its significance, yet as the year progressed there has been a building world consensus that there is an invitation to humanity to join hearts in ONE Love with an invocation for a new consciousness of unity on December 22nd.

Sydney Sings will be joined by the Sydney Swans, Rev Stephanie Dowrick’s congregation and community, Wake Up Sydney, Uncle Max, and the Sydney Boys and Girls Brigade…just to name a few! But – they need you to join them! Regardless of your singing ability, your voice is needed. Your earth needs it.

Join Sydney Sings on December 22nd at the Pitt St Uniting Church, 264 Pitt St Sydney, at 9am, and download a poster here.

The event will be streamed live internationally! Click here for more information about One Earth One Voice, or contact us for further information. Don’t forget to join the Facebook event!