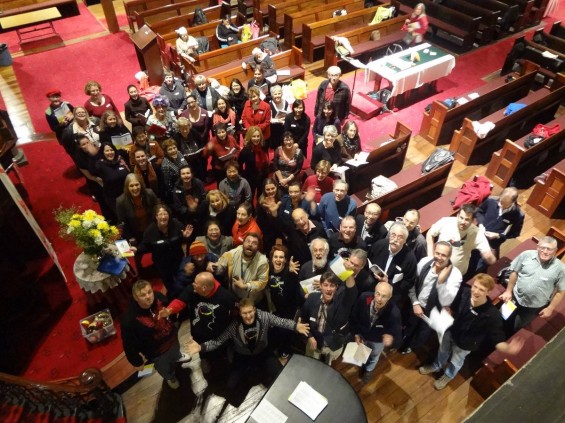 On Tuesday 28th August, conductors Elizabeth Lecoanet and Shannon Brown hosted a special soirée for Sydney Sings, celebrating their debut performance – the doors to the Pitt St Uniting Church were opened to the public, who joined the choir in an open rehearsal, enjoyed a performance and then shared supper with the choir.

The Soirée was attended by Sydney Morning Herald reporter, Malcolm Brown, who later reported on the event. The Soirée was a huge success – congratulations to the Sydney Singers.  Elizabeth was  interviewed on the ABC Radio PM Program, and Tania de Jong AM was also featured on 702 ABC Radio Sydney.

Please click here for some more photos and videos of the evening – congratulations to all involved!

Sydney Sings is always welcoming new members – why not visit them at the Pitt St Uniting Church on Tuesdays at 5.30 – 6.45pm?