Come join us now! The new season has begun.

All With One Voice choirs have begun meeting for the 2018 Season. Everyone is invited, and there’s no audition necessary. If you think you’d like to join, but are still unsure, why not just visit the choir nearest you and check it out? You’ll meet people, participate in a rehearsal led by one of our fantastically talented conductors, and enjoy supper and conversation with other members.

We know you’ll love it, and we’ll love meeting you!

All the information you need to join or visit for the first time is here. 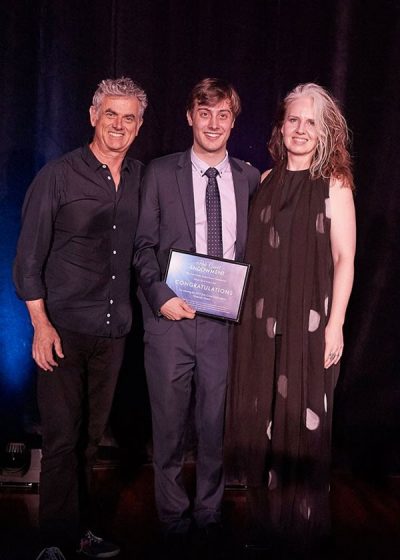 The prestigious Rob Guest Endowment Musician Award was won by Anthony Barnhill. Funded by the Capitol Theatre and the Sydney Lyric Theatre, Anthony took home a $10,000 cash prize intended to help fund the tuition and experience needed to help him become a leader in his field.

On behalf of Creativity Australia & With One Voice we congratulate Anthony on this amazing achievement and appreciate how lucky we are to have him as part of the family!

More than 60% of people in our communities have felt lonely and disconnected at some time. For people experiencing disadvantage, this number is even higher. The financial, social and individual costs to our communities are growing every day, but solutions that are genuinely inclusive and accessible are limited.

Singing for Inclusion is a training course designed in partnership with Creativity Australia and Community Music Victoria to support community choirs and the With One Voice social inclusion program leaders to make a difference.

“In a world that is increasingly disconnected, community singing is an incredible way to connect people, create opportunities and improve wellbeing” says Creativity Australia founder Tania de Jong AM.

“Unfortunately, true inclusivity is hard to achieve, even for the most well-meaning and committed singing leader” says Community Music Victoria Chair Jane Coker.

Social inclusion singing groups require leaders that combine the skills of social worker, community development, teacher and conductor. This is a rare combination of skills that very few people possess.

The Sing for Inclusion training course will provide critical skills for musical leaders already working in this space, and develop new leaders so more communities can benefit from the inclusive power of singing.

To make the training accessible to community singing leaders, who are often volunteers or run programs in their spare time, 25 scholarships are being awarded. This has been made possible through the generous support of the Ian Potter Foundation and The RE Ross Trust.

Leaders can apply here or at  Community Music Victoria (www.cmvic.org.au)

It was a fantastic day for our members who headed out to the Melbourne CBD on Australia Day.
The sun was out, and smiles were on. See below some of the awesome snaps from the parade! 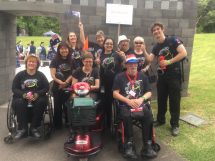 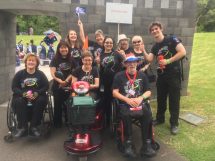 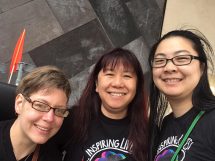 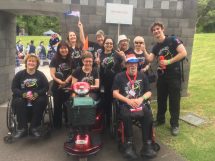 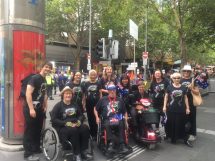 January is almost over, and 2017 is well on its way to being a fantastic year for the With One Voice choirs. It isn’t long now till choir rehearsals start up again, so make sure you note down the below dates, so you don’t miss out!

To kick start the year the choirs located around Melbourne have been invited to participate in the Australia Day Parade.
The choirs had so much fun last year, and it’s such a fantastic way to open the choir year. If you don’t have anything planned for Australia Day the parade begins at 11:00 tomorrow.  So get a group of friends or head into the CBD with your family and support all the wonderful groups that will be featured in this year’s parade.

The Most Wonderful Time of the Year

It has been such an incredible year for Creativity Australia, and we are extremely excited to co-create with you in 2017! Our With One Voicechoirs recommence the first week of February so why not register HERE and start the new year with a song in your heart?

The choir year is about to wrap up and last week we got to celebrate at our big end of year sing! The With One BIG Voice Sing for Good Finale was an absolute blast! Former Premier Ted Baillieu and Dr. Karl from ‘Neighbours’ (Alan Fletcher) announced all the fantastic Sing for Good winners.  Check out the 2016 winners at our website!

We are so excited to share that Creativity Australia was presented with a cheque from the Bank of Melbourne as a part of their Neighbourhood Fund. This fund supports local charities and programs that deliver sustainable benefits to Victorian communities. It is the start of something very exciting! With this grant, we will be able to create a concert series at Scots Church in Melbourne 4 times in 2017 welcoming our choirs, citizens, and workers of Melbourne and surrounds and new participants to our programs.

Our Founder and Chair Tania de Jong AM has been voted as one of the not-for-profit and social sector’s most impactful individuals of 2016.

The members of Impact 25 spend their days advocating for the issues of the day, working with the disadvantaged and silenced groups, finding ways to improve efficiency, inspiring others and even leading the country. The winners this year are a fantastic group of individuals you can see all the winners here.

Tania’s hard work with Creativity Australia and the wider Australian community is inspiring , and we are delighted to see she has been recognised as an Impact 25 2016 winner.

Start your own With One Voice Choir

We have 10k grants available to help you establish a With One Voice choir in your local community, submit an Expression of Interest outlining who you are, your community and the need. Round 6 is officially open so get your applications in before Friday June 1, 2018. 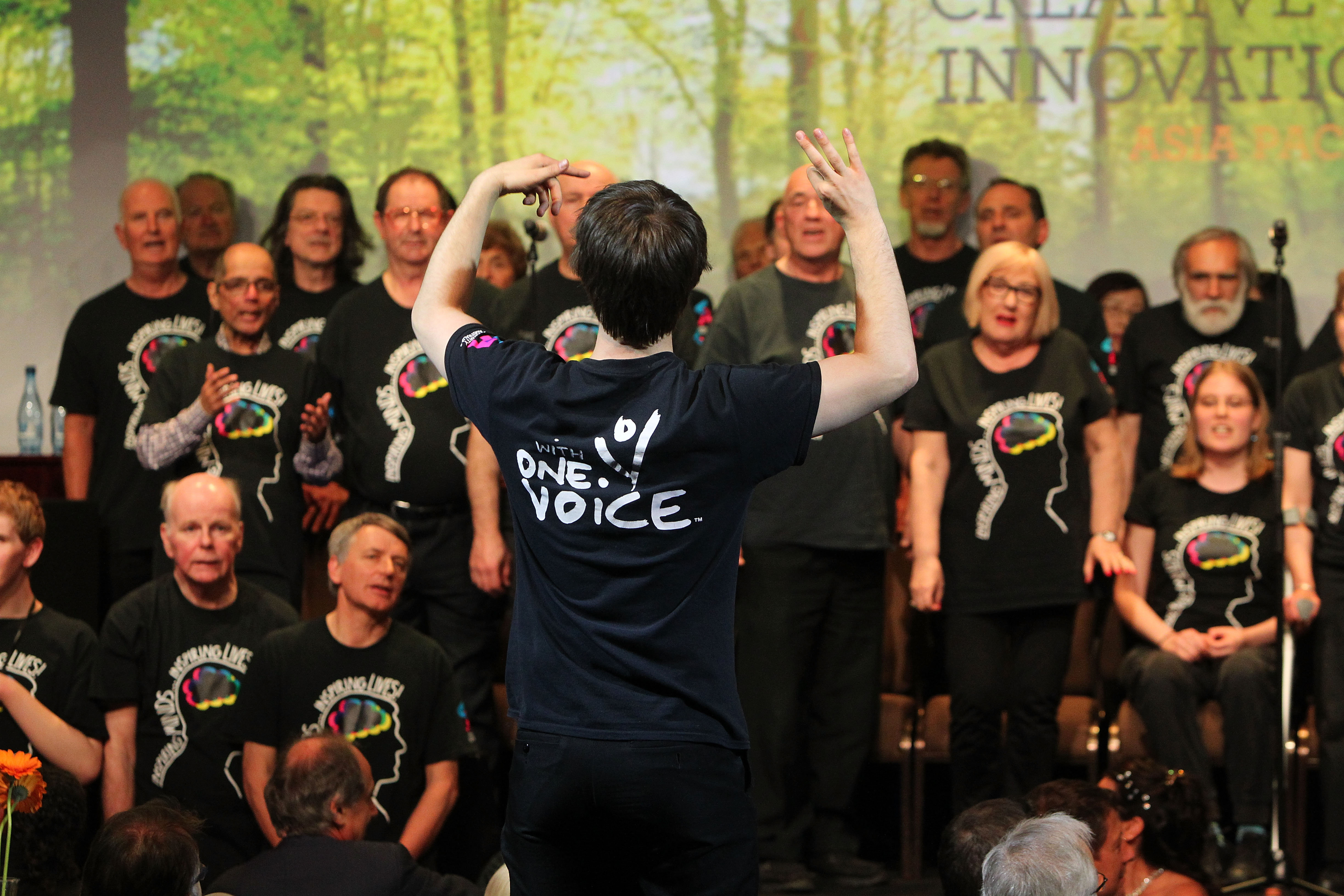 By establishing a local community choir under the auspices of Creativity Australia (as a registered charity) you hold a licence that enables the choir to raise funds to support projects and initiatives at a local level.

Grants available to start your own choir 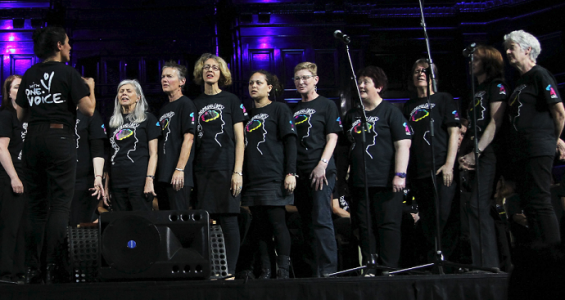 Would you like to make a MASSIVE difference in your community to change lives?

Creativity Australia welcomes all communities from across Australia to apply for seed funding to create a With One Voice community choir and be part of the solution to building stronger communities and reducing loneliness, isolation and disadvantage in their community.

The With One Voice program has been proven to enhance wellbeing, create greater social inclusion and increased community support with 98% of participants experiencing less stress, 91% improved social bonds and 66% less depressed. Furthermore, 79%  of participants have learned new things and gained new skills for work and life, and 60% have gained increased understanding & appreciation of diversity.  The program has also been named in Anthill’s SMART 100 social innovations in 2016, 2015, 2014 and 2013.

Find more information and apply for a grant.

With One BIG Voice Sing for Good Finale

Join Creativity Australia‘s inclusive With One Voice choirs for an unforgettable evening ofjoy, inspiration, and community!

Entry by donation.  Register at Eventbrite

With One Voice Ashburton invites you to an evening of songs and supper. 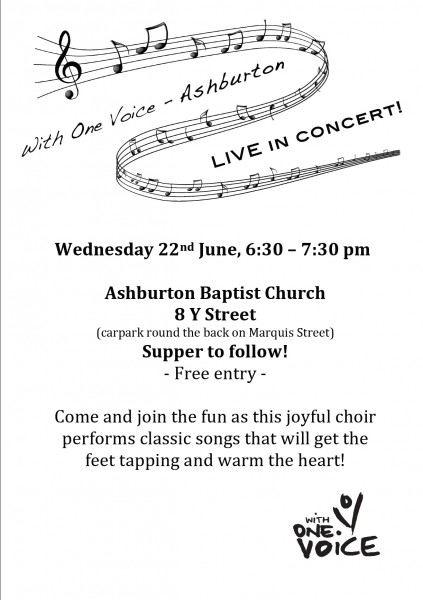