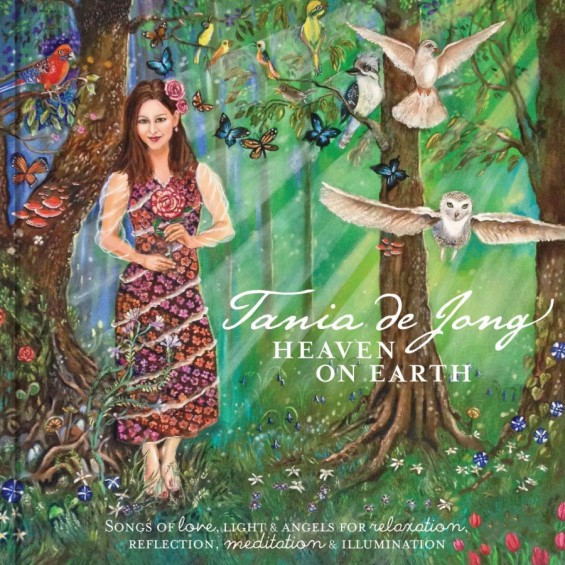 Tania will release her first solo album this month, titled ‘Heaven on Earth’. Working with acclaimed pianist, composer and arranger Joe Chindamo this CD features some of the most heavenly music ever written. It is designed for meditation, relaxation and illumination.

Songs of Love, Light and Angels for relaxation, reflection, meditation and illumination.

Heaven on Earth is a classical spiritual recording bringing together the angelic voice of soprano Tania de Jong with the virtuosic genius of pianist, composer and arranger Joe Chindamo. Also appearing on the album is one of Australia’s most acclaimed violinists Zoe Black and baritone Jonathan Morton. The album has been recorded with some of Australia’s leading musicians.

The album includes originals Heaven on Earth, Rainbow Shower and Peace Om shanti with compositions by Chindamo and lyrics by de Jong. There are also reinventions of some gorgeous standards including Summertime, Somewhere from Westside Story and La Vie en Rose and glorious classical reinventions of some of the greatest symphonies and concertos. The recording features the work of Beethoven, Mozart, Faure, Elgar and Dvorák though not always in the way you may expect.

Tania said: “In every piece there is something new that will bring you the music in a way you have not heard it before. The songs are all about journeying beyond the here and now, opening your heart, finding your light, letting it shine, the importance of love and the reminder that there is only this present moment. I hope you find as much light, joy, love and peace in this music as I do.”